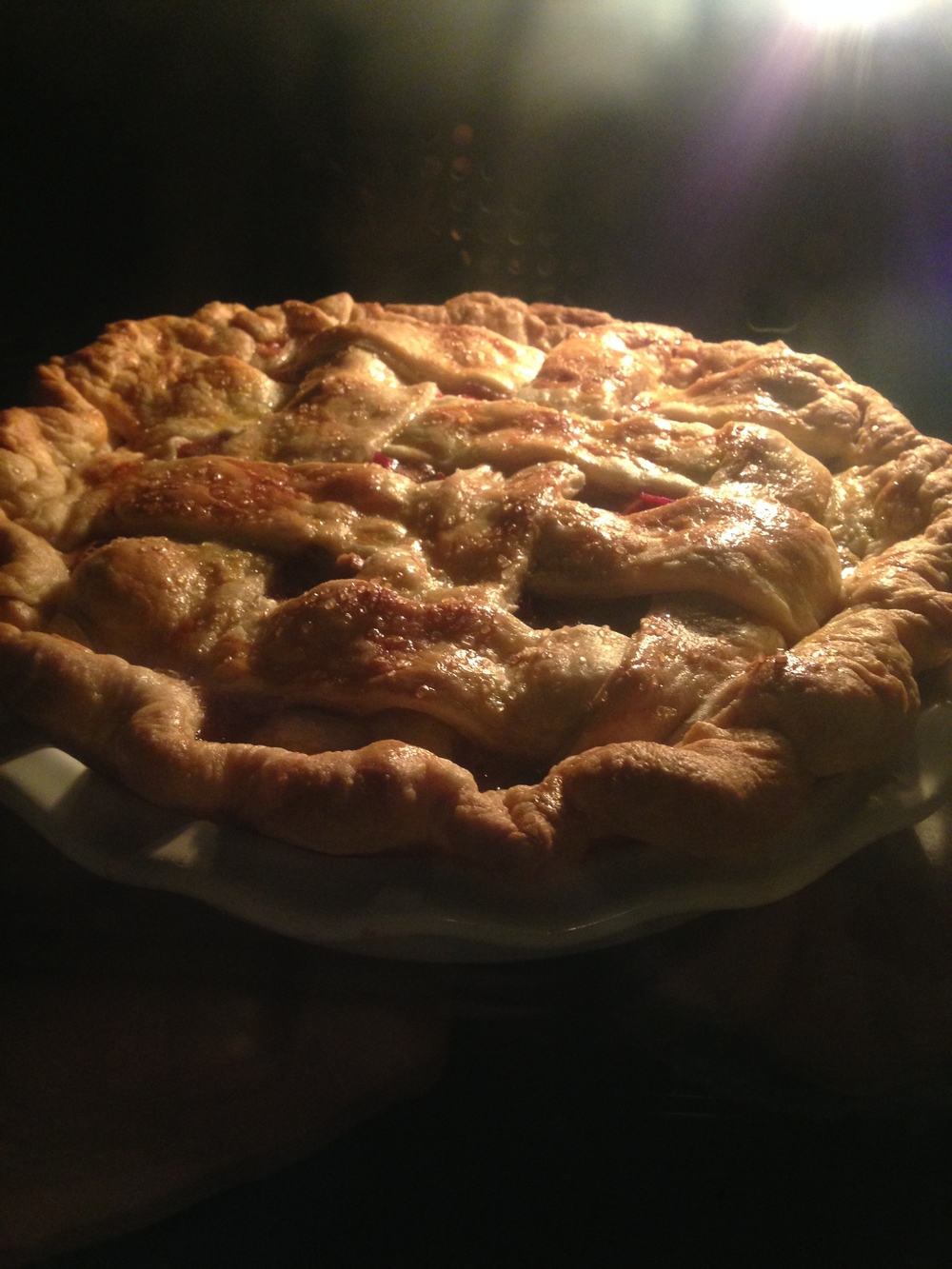 Since I have moved to Germany I have been baking American-style pies. I have always had trouble with the crust. It is just butter and flour, but the right amount of each and more importantly the temperature throughout is the difficult part. The crust ends up tasting ok, but the way from the rolling pin to the pan is difficult.

Markus bought me a book that has all the handwork of making the crust nicely explained with pictures. Before I had been using the Betty Crocker picture cookbook, but the new book by Emily and Melissa Elsen was way more helpful.

“The Four & Twenty Blackbirds Pie Book” is from a pie shop in, guess where, Brooklyn. Of course! If it is not a cookbook from Portland, then Brooklyn. The first recipe for Spring is the Rhubarb Pie. Rhubarb is starting to show up in the stores, so I decided to attempt it. They had me freeze the fresh rhubarb before to get the extra water out. This is always a problem I have – watery pies that don’t cut nicely. I have almost given up on apple pies. For apple pies, the trick is the right kind of apples. Finding American apple sorts in Germany is not what I want to attempt. But I would have never thought of freezing the Rhubarb!

The crust has its own section of the cookbook. Ice is really important. I had to start the day before freezing the ice and freezing the rhubarb. German households don’t always have ice at home. By the way, if you want a laugh: ice recipe (read the comments).

The book even explains how to make a lattice, which is my new cooking term for the week. That is the term for the woven the dough on the top of the pie.

I was pretty impressed with myself. It looks somewhat like the picture. The book did not go into detail about the crimping on the side. It says that the crimping is your signature. I should apparently design my own crimping style.  Right now I have a crimping style much like a doctor’s signature. Messy!  So this was the first of many of the pies. I don’t know if I will be able to cook through this book as Markus cooks through books. Thankfully it is divided into seasons. I guess I can just start with Spring and see how it goes from there!

Update: Since writing this I have finished many more of the pies.

Rhubarb Custard pie – Worked out really nice, but the oatmeal crust could have used some improvement. It was really hard to eat.

Strawberry Balsamic Pie – The crust was perfect, but the strawberries were too runny. What a disappointment!

Chamomile Buttermilk Custard Pie – The the chamomile tea, which is steeped in milk, wasn’t as strong as I would have liked it. But cool idea!

Lavender Honey Custard Pie – I had to make my own lavender oil by steeping lavender blooms in sunflower oil. I also used lavender honey and lavender candied flowers on top.

Lizzie’s Lemon Sour Cream Pie – This was like a Lemon Meringue which I have done before.

Derby Pie – This recipe used bourbon and mint leaves, a little reminiscent of a mint julep. It was too chocolaty for the Germans!

Apple Rose Pie – Here I used rose water, which I got at the Turkish shop across the street. Next time I will use more rose water to create a stronger rose taste. But what do roses taste like?

5 more to go in spring!!! I will make sure to take more pictures.