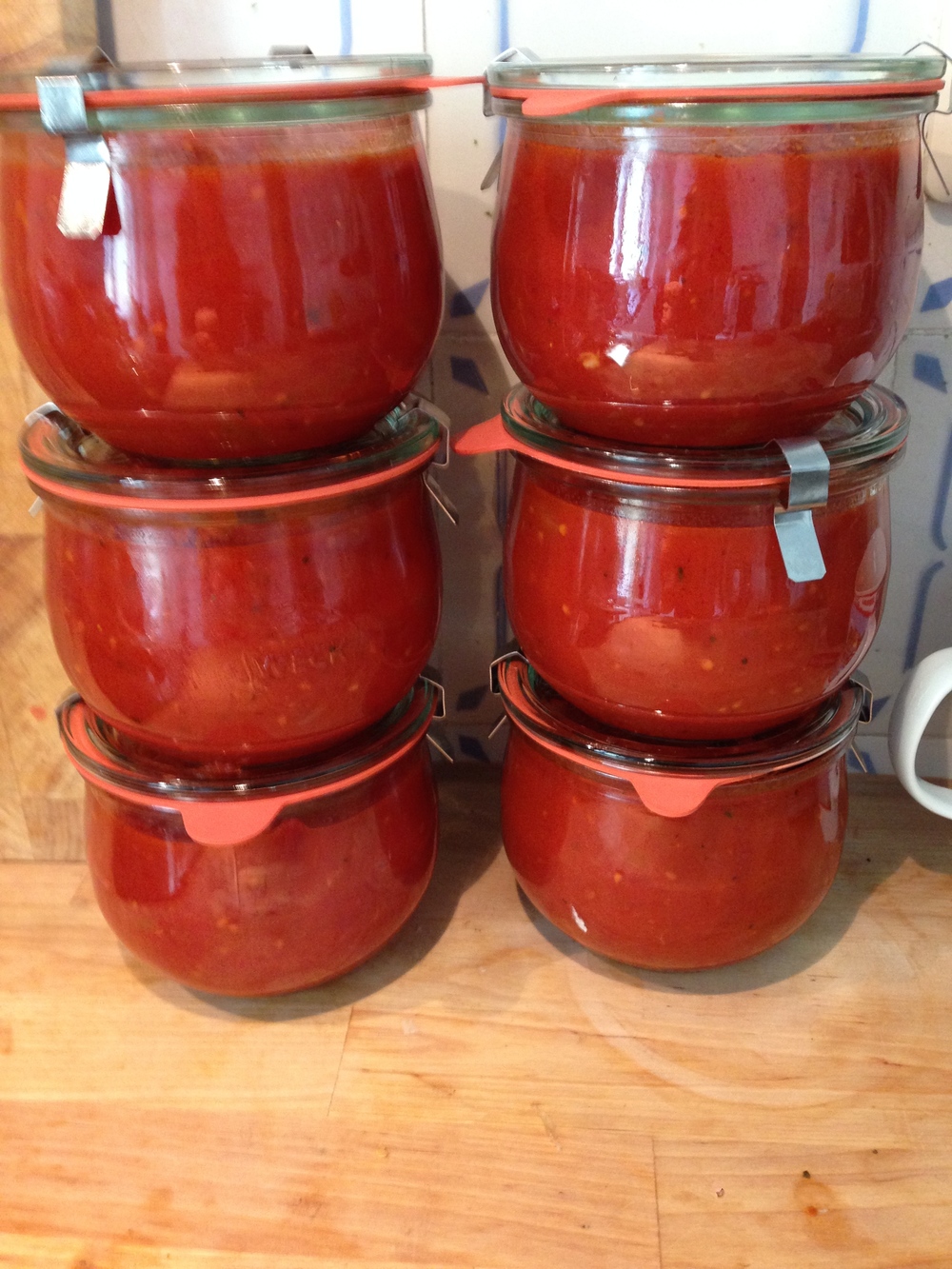 Since I canned the rhubarb and green tomatoes for Markus’ last cooking extravaganza, I have decided to can more. The two things we use the most and pay way too much for is tomato sugo and chicken stock. I got together my Weck glasses and Mason jars and started with the sugo.

Tomato sugo is just tomato sauce cooked down. If you cook tomatoes for a really long time, they get sweet. Start with onions and olive oil and then add basil and a bit of salt and pepper to the tomatoes you have a really sweet tomato sauce for pasta, pizza, or just dipping. But it does take awhile to cook down.

The next day I went to the store and bought 2 kilos of chicken and a Mirepoix to make chicken broth.  By the way, I have been using the terms broth and stock interchangeably. Apparently broth is made with bones and stock without??  I googled it and nobody really knows. I made mine with bones, meat and all.

My first attempt I used the Gramercy Tavern recipe which included chicken wings, 2 kilos of chicken bone and 2.5 hours of cooking. I ended up with the most amazing . . .  Chicken Jus. I had 4 or 5 sterilised Weck glasses and Mason jars ready to can and I ended up needing to use only one Weck glass for a Jus. I was so angry that I am only writing the blog entry now after 2 weeks since I have settled down. I wanted broth to last months, not one Jus. So Gramercy Tavern led me astray.

In my second attempt I used 3 kilos of chicken and only an hour of cooking. We now have a good stock of chicken stock!  We took the meat and added it to a roux to make Chicken Fricassee. It is a lot like chicken and dumplings, only rice instead of dumplings.  I now have frozen lunches to last a couple of weeks!

I don’t know which I like better — the German Weck glasses or the American Mason jars. The Weck rubber rings are easier to get here than the lids for the Mason jars, which I will have to replace. Markus and I are discussing storage space for the jars. They both look so nice when displayed. Weck glasses have been in style for awhile, and now Mason jars are starting to become popular here in American restaurants. Today I received a package in the mail. Markus surprised me:

Now that spring is here, I will have to start canning some more. Maybe I will pickle some. There are so many amazing blogs full of ideas. I’ll share whatever I decide to do.